It was fun while it lasted!

Microsoft discontinued all support and updates, including security updates for Windows 7 on January 14th 2020 .  This is called “End of life”, which basically means that an application or operating system is no longer supported by the company that makes it.

As we have mentioned before, running End of life, old or infrequently updated software on your computer is dangerous, and whilst many software developers do continue to release updates to fix security issues, this is not always the case.

While Windows 7 wasn’t rendered obsolete after this date, it does mean that using it brings with it an increased risk of security vulnerabilities – the more people that use Windows 7 after the End of Life date, the bigger the incentive will be for malicious hackers to target viruses at it. Remember the NHS and Windows XP disaster? The National Cyber Security Centre (NCSC), the public-facing arm of  GCHQ, (the UK Governments Intelligence and Security services) have warned people not to use Windows 7 for banking or emails.

‘Microsoft made a commitment to provide 10 years of product support for Windows 7 when it was released on October 22, 2009,’ the company explained. ‘When this 10-year period ends, Microsoft will discontinue Windows 7 support so that we can focus our investment on supporting newer technologies and great new experiences.’

Upgrading to Windows 10 is relatively easy, and in many cases, you can keep your files on your PC. Most programs will have been updated to work on Windows 10, and the layout and interface are similar to Windows 7.

Windows 10 is a modern operating system that might struggle to work well on an old Windows 7 machine. For Windows 10 to work well, we’d recommend at least a 2GHz dual-core processor, 4GB of RAM (8GB ideally) and a 120GB hard drive (with at least 30Gb freely available). We have been installing SSDs on many computers that we have upgraded to Windows 10 as it provides a significant increase in performance as well as being cost-effective.

Buying a new or used machine with Windows 10 already installed is another option. You can quite easily move your files and folders to your new machine using an external hard drive.

No matter which route you take, you should make sure that your documents are safely backed up. 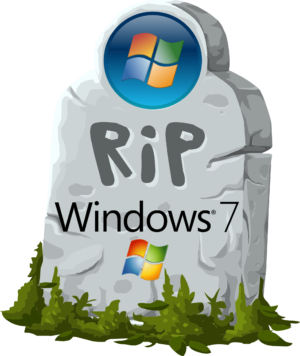